The store will not work correctly in the case when cookies are disabled.
LINK UP TO LEVEL UP
EXPANDING IOT CAPABILITIES THROUGH PEOPLE AND TECHNOLOGY

Your one-stop shop for the open IoT. Backed by a dedicated team of experts, customers and sellers seamlessly connect to expand their capabilities without all the complexity.
Menu
Interested in being a seller? click here
Account
Settings
Currency
USD - US Dollar
Search

Sign Up
Be the first to review this product
ION driver for Tridium Niagara allows to leverage a full range of Schneider ION metering features. ION protocol provides access to all features like advanced real time data, data recorders, waveforms. With ION driver for Niagara 4 framework one can build a fully-functional power management system with unprecedented analytical capabilities.
Contact Seller
Price $756.00 - $3,687.00
$0.00
Skip to the end of the images gallery

Skip to the beginning of the images gallery
Overview
Details

Thanks to ION architecture one ION device simultaneously can operate as:

As one might expect, ION meters do measure electrical network parameters with high precision (up to Class 0.1).

ION meters constantly monitor the quality of electrical voltage and current to detect possible power disturbances: undervoltage, overvoltage, sag/swell, harmonic distortion, transients. Although many meters provide some power quality metrics, e.g. total harmonic distortion or THD, ION meters do it in a very detailed way. For example, they calculate voltage and current harmonics up to 127th order and for sag/swell and transient analysis they capture the measured signal waveform as often as 30,000 times per second. Power quality analysis can be performed according to EN50160 and IEC 61000-4-30 Class A standards.

ION meters can be equipped with digital and analog inputs and outputs, which can be monitored and controlled in PLC-like fashion. It is possible to build complex relay switching logic or even implement a PID loop in ION.

ION meters are the key element of EcoStruxure Power, Schneider Electric integral system for electrical installations. They are often accompanied with Power Monitoring Expert (also known as PME), a specialized SCADA system. Although ION meters can communicate with multiple protocols, their full functionality can only be accessed with proprietary ION protocol. Until now PME was the only software which can ‘speak’ ION and utilize the full power of ION devices. Now their power is open to Tridium Niagara.

Reviews
You can not add the review on this product as you have not purchased this product yet.
Pricing
Support
User Guide

Please email us to support@baudrate.io if you have any questions. 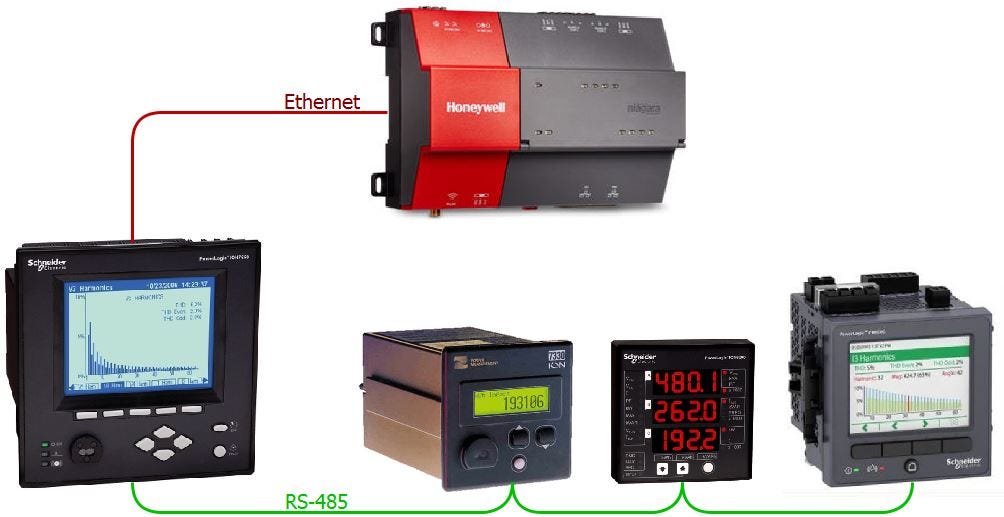